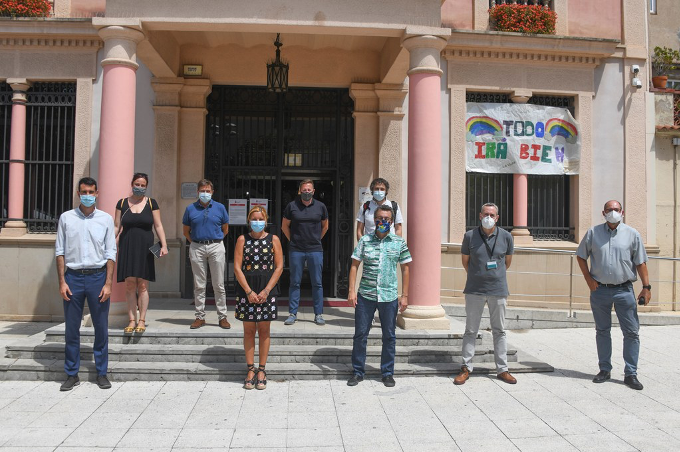 The initiative defines a new successful model of collaboration between the administration and the private sector to promote solar self-consumption in Rubí.

Rubí, July 29, 2020.-The Rubí City Council, through the Rubí Brilla service, has coordinated the first shared energy self-consumption project in an industrial estate in Spain. With this pioneering initiative, the municipal government meets the objectives of the Covenant of Mayors for Climate and Energy, which commits the city to reduce its emissions by 40% in 2030 compared to 2005.

“Despite the fact that this commitment does not include the industrial sector, taking into account that in Rubí industry represents 40% of the city’s emissions and that we have the most important industrial concentration in Catalonia ─after the Zona Franca─ […], somehow we feel obliged to seek formulas and projects that make Rubí a more sustainable city and that, on the environmental and climate side, have an impact on improving its economic competitiveness”, explained the mayor, Ana María Martínez Martínez.

Industries are, by definition, energy-intensive spaces, in that they produce, transform, manufacture and distribute products so that citizens and municipalities have everything they need for day-to-day life. “If there is a sector with potential for improvement in strictly energy issues, it is the industrial sector.” According to the mayor, improving the energy efficiency of industrial processes and the incorporation of energy self-consumption systems for electrical and thermal uses is one of the greatest challenges we have as a society.

In addition to meeting the objectives of the Covenant of Mayors for Climate and Energy, this project “is fully aligned with our objectives as a government team,” said Martínez Martínez. Without going any further, the 2019-2023 Mandate Plan is based on the 17 Sustainable Development Goals (SDGs) of the United Nations, which aim to make cities and communities sustainable.

For his part, the councilor for the Environment and Ecological Transition, Andrés Medrano Muñoz, commented that “this project is part of the new paradigm: to stop consuming energy produced hundreds of kilometers away with non-renewable sources and to start producing and consuming zero kilometer energy”.

The project is part of the “Rubí Industria Circular (RIC)” initiative, which aims to create a workspace to diagnose, promote and implement a series of actions to reduce the costs associated with energy, water, waste, materials and mobility in the industrial context. “RIC promotes the shared management of resources, with the aim of having a circular vision, which allows that the surplus for one, can be a resource for another”.

This action is pioneering because it is the first time that a shared self-consumption production tender has been held in the industrial sector ─in this case, it is a private tender energized through the public-private initiative, which has been won by the joint venture formed by Enertika, Zener and KM0─. The total power to be installed will be 1.01 MWp and will save more than 300Tn CO₂ per year ─9,000 Tn CO₂ during its useful life (30 years)─.

The project involves a total of 7 companies from the industrial park of Rubí Can Jardí, which can participate in two different ways: through direct investment ─in this case, the UTE acts as engineering─ or opt for the PPA (Power Purchase Agreement) as a financing tool ─a long-term power purchase agreement is established between the producer and the consumer─. “There are companies that do not have the capital to face the investment of photovoltaic panels. The PPA opens the door to the fact that companies of any size can participate in this initiative. It is a formula that has to be extended,” Medrano concluded.

Francesc Tarongi Arteu, CEO of Enertika ─one of the companies that make up the UTE that won the tender─, congratulated the Consistory of Rubí for this initiative: “There are many institutions that are looking at this project because they see it as a benchmark”. And she has sentenced: “After the digital revolution, the energy transition will represent one of the most drastic changes since the industrial revolution”. To achieve the goals set by Europe, Spain and Catalonia, according to Tarongi Arteu, an effort will have to be made in the field of energy efficiency: it will be essential to reduce energy consumption by at least 50%. “And this will only be possible if we are able to decouple economic growth from energy consumption, something that will not be achieved without a major role for renewable energies and the use of waste”.

For his part, Jordi Patiño Sáez, vice-director Supply Chain Management (SCM) of KAO CHIMIGRAF ─one of the participating companies─, explained that his company has become involved in this initiative because the project seemed very interesting to them, because the firm is very integrated in the city ─ 40% of the workforce is from *Rubí─ and because it is aligned with its business model, with an explicit vocation to work for sustainability.

Another unique feature of the project is the commitment to digitalization, with the aim of creating a big energy data of each participating company to optimize resources.

Enertika is an independent energy services group, leader in Spain, Maghreb and Latin America, which offers differentiated and combined solutions under the EaaS (Energy as a Service) business model in energy efficiency and distributed generation with the aim of improving energy sustainability and optimizing the energy cost of its customers.

The company is immersed in the development of new projects in the food and beverage sector due to its high potential in distributed generation and energy efficiency.

Enertika’s consulting division continues to expand its portfolio of industrial clients with the aim of developing new strategies and Road Maps for decarbonization 2020 – 2030 that will enable intensive industry to move towards the goal of zero emissions while guaranteeing competitiveness.